I don't think I'm the only one who was taken back by the apparent lack of taste expressed in the cheapo, ergo-centric designs of the Playstation 3 and the oh, so 1997-ly named XBOX 360.

The XBOX's name in particular, makes me want to somehow procure a device that can erase the years of 1996-1998 from history. Here is a list of names microsoft probably considered before settling on XBOX 360.
- XBOX x-TrEmE
- XXBOX
- XBOX 2000
- XBOX Millennium (whoops a bit late for that)
- XBOX Centrosplat
- YBOX or ZBOX
- 2BOX or BOX2

I suppose it could have been much worse.

Playstation 3
Controllers so ergonomic, they are uglier than shit!

Remind me again why ergo-centric design dissappeared from quality industrial design? Oh right, we discovered how to make things not cause carpal tunnel AND not look down right stupid at the same time. The PS3's controllers look like sex toys, they also look really, really cheap. How does sony expect people to take them seriously with such cheap-ass looking equipment. Sony can and has done better.

Of all of the console designs, the nintendo "Revolution" model is the most serious and descent looking. It actually looks like a seriously awesome piece of equipment. Unlike all of the other more "Ergo-centric" blobs, the revolution is a nice, simple little box. The vertical-sitting base looks stupid-as-hell though, but I sure hope nobody buys that add-on which makes their system look really, really dumb. The Revolution itself looks like a quality piece of equipment, and indicates that the once hearty and mature "XBOX" brand will probably become the new, cheap-ass "Kiddie-Box" brand. A reversal of roles which is probably to Nintendo's advantage. As for microsoft, they might as well have painted their XBOX 360 bright happy colors because it really looks like a joke next to Nintendo's very serious, hearty and precise-looking machine.
Pwned.

As for the name, I really hope Nintendo doesn't plan on calling their system the revolution, because a name that pretentious and fleeting is quite simply below them.

Drive Your Car AND Boycott the Middle East, at the same time.

Yes, it is possible.

At last, a morally superior oil company.
Be sure that your money goes to nations that are not theocracies or plutocracies. But rather the economically responsible, progressive nation of Venezuela.
(I'd like to also add that Venezuela, quite unlike the middle east, is NOT a terrorism machine nor does it endorse Bush)

When you buy gas at a Citgo gas station (or better known as 7-11 convenience stores and gas stations), your money goes into a responsibe, socially conscious government. Not a totalitarian theocracy like Saudi Arabia. So you can continue to buy gas, and still not help support the neoconservative right, and their close bedfellows: the theocratic, terrorism-machine, the Saudi regime.

Wow. Much better developed and less minimalistic than the last album of theirs, titled "#1".
Really very cool. Much better balanced, analog, and lightly glitchy. Awesome.
Thank you, student radio for playing this. Otherwise I would never have found out about this album.
Extreme awesomeness: to the extreme

This is something interesting I found via Monochrom. 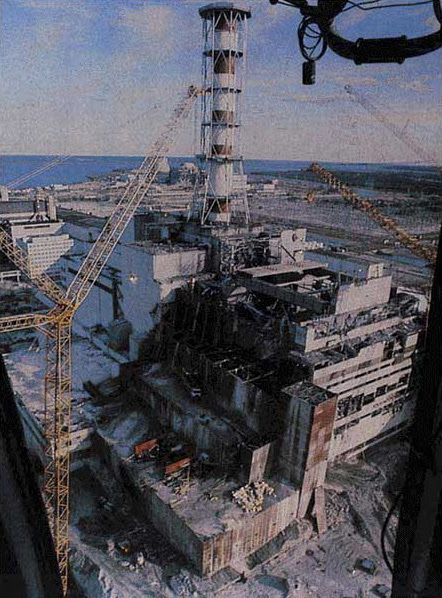 This is a photo of the building taken from a helicopter.
The person who took this photograph, as well as the pilot,
most assuredly died from radiation poisoning, even at this
distance and altitude.

This amazing image of the infamous "Elephant's Foot", a blob of molten corium (unspent uranium mixed with heavy metals) which oozed from the reactor through the floors of the reactor building like magma from a volcano. This image was taken by a robotic camera, it would be impossible for anyone to take this photo in person, because the radiation level was about 20 times that which is generally accepted as a lethal dose. In fact, the radiation level around this blob was almost immeasurable by the instrumentation of the time. The radiation inside the building alone is enough to kill a person after just 2 minutes of exposure.

(technically: 1000 Roentgens/hour (rem/hr) is considered harmful. Just to give you an idea, the radiation in just the building alone has been measured at 20,000 rem/hr and above (depending on proximity to the materials). Apparently, the exact radiation level of this blob has never been determined. I'm sure a theoretical number has been calculated, but niether dosimeters or geiger-counters are able to return a measurment on it because it is just too high.)

A electronic control cabinet which has been partially incorporated into a flow of molten corium and pieces of something that looks like graphite (even though graphite would burst into flames at the temperatures it would be at right there).

Once-molten corium/heavy-metal mixture that overflowed from the reactor during the explosion.


As much as I think nuclear energy is an enviromentally and fiscally sound method of energy production, I think Russia's Chernobyl incident should be take into consideration as how NOT to build a nuclear reactor.
I don't know why, but for some reason, I find this absolutely fascinating.

I think one of the interesting things about Chernobyl is that it was an FBR (Fast-Breeder Reactor) which had a unique feature to it that most reactors do not have (for safety and containment reasons): It could be refuelled while running. They could literally remove the detachable "cap" of the reactor by internally mounted cranes and put new uranium fuel into the system as it was reacting. Not only is this horrendously dangerous, but it also means that the only thing containing the reactor is a 1000 ton vessel lid.
1000 tons sounds like a lot, but it really isn't when you consider the energy that a nuclear reaction can create. At Chernobyl, the 1000-ton lid literally blew off the reactor and landed inverted, wedged back into the reactor.

This diagram shows the position of the reactor lid (green) and the
location of other things in the ruins, such as the bismuth/sand mixture dropped
by helicopter (grey) and the ubiquitous "parosbrosnoy" or steam duct pipes (cyan) below the reactor which the molten fuel mixtures flowed in between.

What's really interesting is how complex this reactor was, while at the same time, had very few and very little safeguards. Most modern nuclear reactors since the Three Mile Island incident (US) are built with smaller reactors, submerged in water. Above that is a really thick concrete dome and then another concrete dome over that. Adding the water alone significantly reduces radiation outside the reactor during normal operation. In fact, if the reactor is small enough, you could even stand at the edge of the tank and look right down at the reactor and not receieve harmful amounts of radiation (Most nuclear reactors are not that small, though)
Chernobyl had nothing more than a (removable) concrete lid on top of it's #4 reactor. Which made it inherently dangerous, but at the same time very versatile and economical. There is an assumption that the reason why they were using an FBR with a removable lid was perhaps for weapons-manufacturing purposes, except there is no evidence that the Chernobyl fascility ever had any of the other equipment and systems to process weapons-grade materials.

But wow, these are some amazing pictures. Considering what it took to take them. 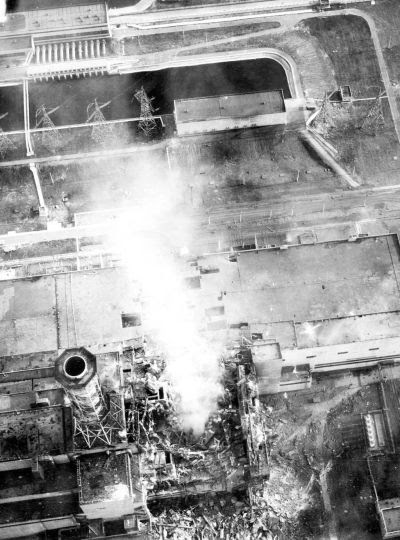 This picture was taken from a helicopter just after the explosion. This is the white cloud of smoke from the graphite fires mixed with a column of radioactive, ionized air from the reactor. This is the cloud that people reported seeing in the nearby town of Pripyat, which was described as "shimmering" during the day (because of the heat) and "luminescent" at night (because of the radioactive debris).
The person who took this photograph, as well as the pilot of the helicopter died of radiation poisoning two days later (according to the website which is hosting this photograph) 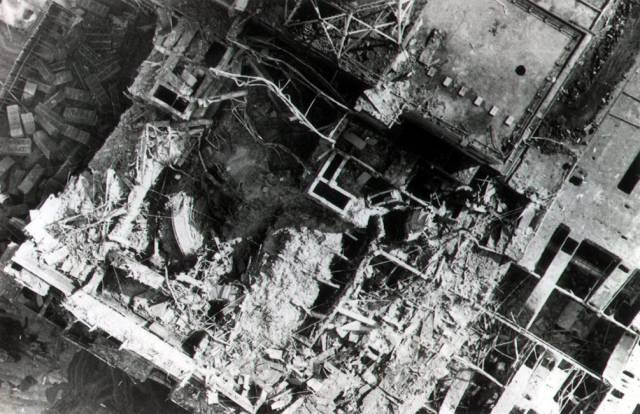 In this photograph, you can actually see the round, circular 1000-ton reactor lid buried in a mass of debris. 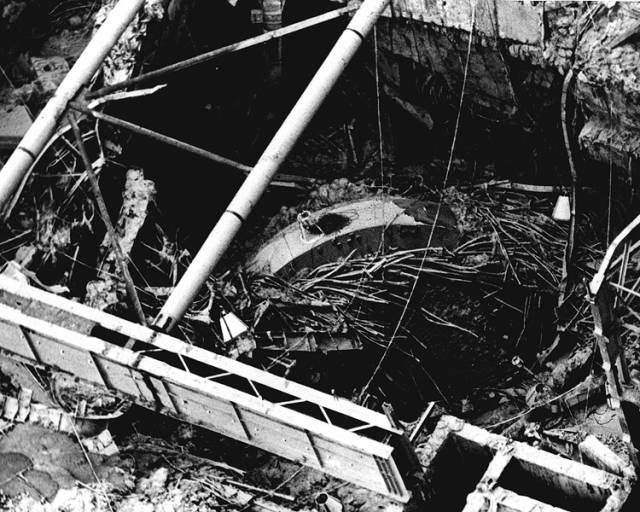 You can see the lid even clearer in this photograph.
That lid weighed more than 6 modern frieght diesel-electric locomotives,
and was blown off the reactor and flipped over like a coin by the energy
of the explosion.

It's a good thing to know that the nuclear reactors in development right now, are far safer than the weapons-oriented and large-scale "Mass reactors" of the cold-war era. The smaller Thermal reactors use far less fuel and don't get near as hot. Since you are no longer trying to get the Uranium so such super-critical mass to produce heat (and Plutonium for weapons purposes), the risk of meltdown, or when the Uranium fission reactions become out-of-control and release too much energy is reduced, if not physically impossible. The best part is: with a smaller reactor, you get less harmful waste. Instead of producing about 45% Corium (unspent liquified uranium and heavy metal mixture), 50% (or more) lead, bismuth and other heavy metals, and about 5% (or less) Plutonium. All of which is irradiated or very radioactive and can only be dealt with safely by burying it in barrels underground. Smaller thermal reactors produce about 70%(or more) Corium, and about 30% spent-fuel, lead, bismuth and other heavy metals. This mixture is a lot easier to contain and the corium can be easily seperated from the other metals and reused in reprocessing. This results in a lot less waste, and a lot less environmental or public health hazards. The removal of plutonium from the equasion seems to make everything better. Not only for safety and practicality, but also for disarmament. Plutonium is an incredibly radioactive material that does not occour naturally, because it has so much mass it can't hold itself together without artificial means. This is why it is used for weapons. I suppose the idea behind that is you get the same amount of energy as you might with uranium, but with less weight and material. Smaller packaging for more versatile use.

But honestly, I don't think we need any more nuclear weapons in the world, and we certainly don't need more countries to start joining the few nations that already have them.

Pictures are from this amazing photo-album at:
http://www.spaceman.ca/gallery/chernobyl/Helicopt03_05_86_1

Yes so I want to do some things this Summer which involve the making of stuff.
I've already started a few of these projects and they are very neat and swell at the same time.

1. Make a casing for those laptop parts I've had sitting around for the last 2 years
2. Making a chair for my mother's garden.

But the biggest and the best one of all is an idea that Andrew came up with, that I want to perfect.

I've started the laptop thing, but right now there are things I need to get done first, like Finals and stuff. But the current status of my finals are the following:

Physics: All I have to make is a B on the final to get an A

Music: Why isn't there a final for this class?

Philosophy: But I would rather write a 3-page paper on Architecture, or Art.